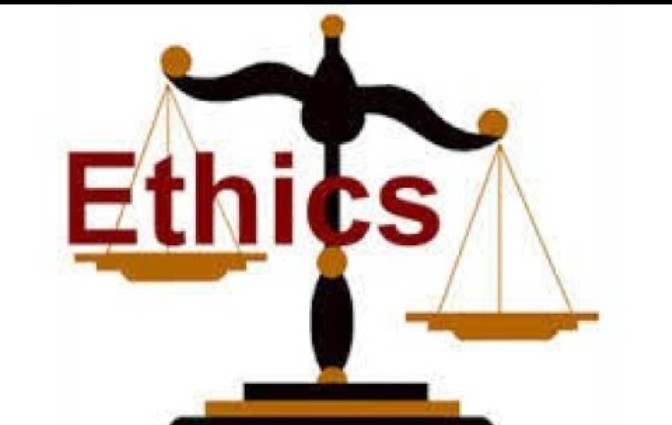 Ethics are principles and values, which together with rules of conduct and laws, regulate a profession, such as the legal profession. Ethical standards in legal ethics include:

What is Professional Ethics?

Chief Justice Marshall of American Supreme Court has also echoed on Legal Ethics in the same spirit, as follows:
“the fundamental aim of Legal Ethics is to maintain the honour and dignity of the Law Profession, to secure a spirit of friendly co-operation between the Bench and the Bar in the promotion of the highest standard of justice, to establish honourable and fair dealings of the Counsel with his clients, opponent and witnesses; to establish a spirit of brotherhood in the Bar itself; and to secure that lawyer discharge their responsibilities to the community generally.”

Edmund Burke has combined the element of learning and nobility in the legal profession. He states:

“The law is one of the first and noblest of human sciences, a science, which does more to quicken and invigorate the understanding, than all the parts of learning put together.”

Lawyer’s duty to the Court

Under section 1 of the Bar Council of India Rules provide for advocate’s duties to the court.

1. An advocate should present his case with dignity and self-respect.

2. An advocate should maintain respectful attitude towards the courts.

3. An advocate should not influence the decision of the court by an illegal or improper means.

4. An advocate should appear in proper dress in the court.

5. An advocate should not wear bands or gown in public places other than courts.

6. An advocate should not act in any matter in which he is himself pecuniarily interested.

In D.C Saxena v. Chief Justice of India (1), the Supreme court has held that a party or counsel appearing before the court should not use in his pleadings, the scurrilous allegations against the judge or the court in order to maintain the dignity and decorum of the court, otherwise, the reputation and dignity of the judge would disappear and the independence of the judiciary would be badly affected.

Lawyer’s duty to the client

Under section 2 of the Bar Council of India Rules provide the duties of advocate toward their clients.

1. An advocate behaviour towards his client should be kind and polite.

2. An advocate should never manipulate a client and give proper advice to the client.

3. An advocate should try his best to get justice for his client.

5. It is the duty of an advocate fearlessly to uphold the interests of his client by all the fair and honourable means.

6. An advocate should not come close with the opposite party.

7. An advocate should not give any improper advice to his client that will affect negatively.

8. An advocate should keep accounts of the clients’ money entrusted to him.

9. Proper accounting of everything is important in the case and for the client.

10. An advocate should not disclose any weaknesses of his client and should not reveal any material or document to the opposite party.

11. An advocate should not accept any bribe, gifts, and fees from the opposition party.

In State of Orissa v. Nalini Kanta Muduli (2), the Supreme Court has held that as the members of Bar are officers of the court, that have bounden duty to assist the court, and not to mislead it. The court further held that citing the judgement of account which has been over-ruled by a larger bench of High Court and Supreme Court without disclosing the fact that it has been over-ruled, is a matter of serious concern, and amounts to professional misconduct.

In Bar Council of India v. Kurapati Satya Narayana (3), the Supreme Court has held that delinquent advocate’s failure to pay to the client the decretal money which he had received on behalf of his client, amounted to breach of trust and grave professional misconduct. Bar council of India had erred, in taking the view that the delinquent had utilised the money for his treatment and had no intension and had no intension to take the money. Hence, punishment of removal of his name from State Roll was imposed, which was appropriate.

Lawyer’s duty to the Opponent

Section 3 of Bar Council of India rules provide for the duties of an advocate to the opponent party.

1. An advocate should not negotiations with party directly.

2. An advocate should do his best to carry out all legitimate promises made to the opposite party.

3.  An advocate should be fair to his opponent.

In Chandra Sekhar Soni v. Bar Council of Rajasthan & others (4), The Supreme Court held that an advocate may change side if express consent is given by all concerned after a full disclosure of facts. But it is not in accordance with professional etiquette for an advocate while retaining the brief of one party to accept the brief of another party.

Section 4 of the Bar Council of India rules provide for the duties of an advocate’s to the colleagues.

1. An advocate cannot appear in a case where a memo is filed by the name of the other advocate. If he having the consent then only he can appear.

2. An advocate sign-board or name-plate should be of reasonable size.

3.  An advocate has keep goodwill among his fellow advocates.

4. An advocate should not promote unauthorized practice.

Punishment for misconduct of lawyers

In State of Punjab v. Ram Singh (5), The Supreme Court held that the term ‘misconduct’ may involve –

In Advocates Act, section 35 is deal with Punishment of advocates for misconduct-

(1) Where on receipt of a complaint or otherwise a State Bar Council has reason to believe that any advocate on its roll has been guilty of professional or other misconduct, it shall refer the case for disposal of its disciplinary committee.

(2) The disciplinary committee of a State Bar Council (Note: – Certain words omitted by Act 60 of 1973, sec.24) shall fix a date for the hearing of the case a notice thereof to be given to the advocate concerned and to the Advocate General of the State.

(3) The disciplinary committee of a State Bar Council after giving the advocate concerned and the Advocate -General an opportunity of being heard, may make any of the following orders, namely-

b. Reprimand the advocate

c. Suspend the advocate from practice for such periods as it may deem fit.

d. Remove the name of the advocate from the State roll of advocates

(4) Where an advocate is suspended from practice under clause (c) of sub section (3) he shall, during the period of suspension, be debarred from practicing in any court or before any authority or person in India.

(5) Where any notice is issued to the Advocate-General under sub-section (2) the Advocate -General may appear before the disciplinary committee of the State Bar Council either in person or through any advocate appearing on his behalf.

It is clear with these provisions that, if an advocate commits any professional misconduct, he may be punished under this provision.

In the matter of Mahbub Ali Khan (6), it was held by Andhra Pradesh High Court that the term, “misconduct” usually implies an act done wilfully with a wrong intension and as applied to professional people, it includes unprofessional acts even though such acts are not intentionally wrongful.

In Shambhu Ram Yadav v. Hanuman Das Khatry (7) the Supreme Court made it clear that writing a letter to his client to send money to bribe the Judge is a serious misconduct. It also held that legal profession is not a trade or business.

In P.D Gupta v. Ram Murti (8), the advocate purchased property which was subject of litigation from his client at a throw away price, and sold the said property to a third party. He made profits and created more complications in the pending case. The Supreme Court declared him guilty of professional misconduct. The court further held that a lawyer owes duty to be fair not only to his client but to the court as well as to the opposite party in the conduct of his case.

In Ex-Captain Harish Uppal v. Union of India and Another (9), the Supreme Court has held that lawyers have no rights to go on strike or even token strike or to go for a call for boycott. Nor can they obtain from courts in pursuance of a call for strike or boycott while holding vakalatnama on behalf of clients.

PrevPreviousWhat Is Collective Bargaining? – Definition & Process
NextWhat is the importance of writing a research paper?Next

2 replies on “Professional Ethics for Lawyers”

Article that every law student must read 🙌