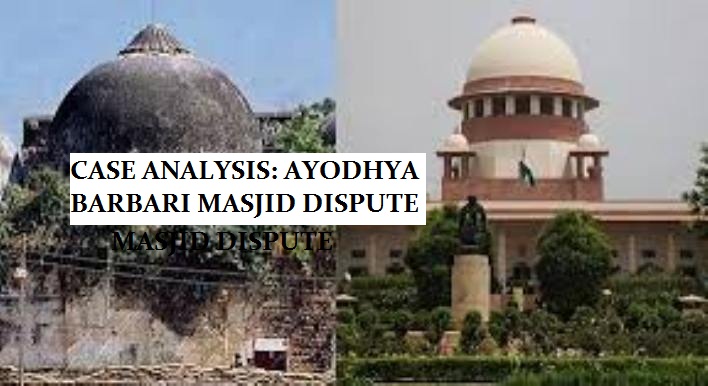 Vs
Union of India and Others

This case has been iconic as its hearing went on for 70 years. Then it was finally decided on 9th November 2019, after a 40 daylong hearing. This is the second longest case hearing after the Kesavananda Bharati case.

(1) The Supreme Court in the exercise of its jurisdiction may pass such decree or make such order as is necessary for doing complete justice in any cause or matter pending before it, and any decree so passed or order so made shall be enforceable throughout the territory of India in such manner as may be prescribed by or under any law made by Parliament and, until provision in that behalf is so made, in such manner as the President may by order1 prescribe.
(2) Subject to the provisions of any law made in this behalf by Parliament, the Supreme Court shall, as respects the whole of the territory of India, have all and every power to make any order for the purpose of securing the attendance of any person, the discovery or production of any documents, or the investigation or punishment of any contempt of itself.

As per the court’s observation, the destruction of the Babri Mosque in 1992 was a violation of law. The act of placing idols beneath the central dome of the mosque in 1949 was an act of “desecration”.

In 1528, Babri Masjid was built as a tribute to Babur by Mir Babar. The local people believed that this Masjid was built by demolishing an already existing Ram Mandir. The first dispute happened between Hindus and Muslims on the pretext of this in 1853-59. The British government intervened and decided to divide the area in two parts. The internal area could be used by the Muslims and the outer by the Hindus and they got the area fenced.
In 1885, this dispute went to the court for the first time when Mahant Raghubir Das, in order to get a Pooja done, asked for a roof to be constructed.

On 23rd december1949, an idol of Lord Rama was kept in the main part of the building and Hindus started worshipping that area as well. The situation worsened. So the government banned the entire area, both the outer as well as the inner area so neither the Hindus nor the Muslims could enter. A lot of civil cases were subsequently filed to lift the government’s ban.

While all of this was going on, the various religious groups were planning things on their own. The Vishwa Hindu Parishad made a committee for the Ram Mandir Nirman. And simultaneously the courts started giving verdicts for the various cases filed over the period of time.

In 1986, the Court of Faizabad, gave permission to Hindus to worship in the disputed area. Angered by this decision, Muslims made their own committee, Babri Masjid Action Committee. In 1989, another case was filed in the name of Ram LallaVirajman, they also asked for the possession of the entire area like the Waqf Board had asked previously.

Over the period of time the situation got more heated. In 1990, minister Lal Krishan Advani, took out a Rath Yatra from Somnath, in Gujarat to Ayodhya, Uttar Pradesh. Things worsened to the extent that communal rights started taking place and this led up to Lal Krishan Advani getting arrested in Uttar Pradesh. He was a senior BJP leader at the time and to show their opposition to this arrest BJP, took back their support from the then V.P Singh government.

In 1991, when the situation kept worsening, the riots continued, and people died. In order to control the situation, Kalian Singh’s government in Uttar Pradesh took the entire area under it’s control.

Next important date which is 6th December 1992, in the midst of thousands of people, the karsevaks demolished the babri masjid and constructed a Ram mandir in its place. The riots started all over India, situation kept worsening. On 16th December 1992, Liberhan Committee was established to enquire in the matter of the demolition of the masjid and who was responsible for it. During this time, Narsimha Rao’s government was ruling the centre, which was a congress government. They proposed that in the disputed area, a Ram mandir, a masjid, library and a museum and other facilities must be set up, which was strongly opposed by the BJP government.

Now in 2002, the BJP government came into power. Prime Minister Atal Bihari Vajpayee started a Ayodhya Vibhag whose main aim was to find a resolution after talking to both Hindus and Muslims.

In April 2002, to finalize the possession of the disputed land, a bench of three judges was constituted at the Allahabad high court. These three judges were- J. Sudhir Agrawal, J. Sibghat Ullah Khan and J. D.V Sharma. The court asked Archaeological Survey of India (ASI) to dig, enquire and study and submit a report on the disputed land. According to this report, there was a temple in the said area in the 12th century and in 1528 a Masjid was also constructed in the same area but there was no evidence of the in between time line of 300 years.so based on the facts, there was a temple, then a Masjid constructed after demolishing the temple as per the local people, this was concluded in the ASI Report.

After considering all the reports and facts at hand, the Allahabad High Court’s Lucknow bench, on 30th September 2010 delivered a historic judgment, as per which they divided the disputed land in three parts, the first part with the Ram murti (idol) went to Ram Lalla Virajman, the Sita Rasoi, bhandara and the Ram Chabutra went to Nirmohi Akhara and the remaining third part went to the Sunni Waqf Board.

The Supreme Court on 9th may 2011 stayed this order on the Allahabad High Court Judgement. In February 2016, Subramaniam Swamy, filed a case in the supreme court of india for the Ram Mandir Nirmaan. And in March 2017, J.JS Kehar, the Supreme Court justice, advised to solve the dispute outside court by mutual understanding of the parties.

By December 2017, the Supreme Court had already received 32 appeals against the Allahabad High Court verdict. Supreme Court said that the hearings for same would start from January 2019. A constitutional bench was set up for the hearing of the matter comprising of J. Ranjan Gogoi, J.Sharad Arvind Bobde, J. D. Y.Chandrachud, J. Ashok Bhushan and J. S. Abdul Nazeer.

Nirmohi Akhada, represented by Sushil Kumar Jain asked for the possession of the inner courtyard which existed since 1934 but they had no proof of documentation to support their claim

Sunni Waqf Board, represented by Rajeev Dhavan, said that on 6th December1992 there was a Masjid in the disputed area and only this fact should be considered. Ram murti (idol) was placed in the middle of the night in December 1949, which is an illegal act and some other party should not benefit from this. As per, the board, yes the Hindu’s worship the idol in the Ram Chabutra, and it is the real birth place of lord Rama and they do not have an objection if the Hindus worship in the disputed area but the inner courtyard must go to the Waqf Board.

Ram LallaVirajman represented by CS Vaidyanathan, claimed that the Ram mandir has already been in the area which was demolished in order to construct the Masjid and since the day from which the idol was kept in the main building, the possession is theirs and the Muslims/ Sunni Waqf Board does not have any claim to the possession of the land. While stressing on the ASI Report, they also claimed that Hindu motifs and sculptures have been found in the slabs/ Pillars of the Babri Masjid which shows that the Ram Mandir was here prior to the Masjid.

After listening to all the parties, the Supreme Court said, that the possession right of a place cannot be decided solely based on hearsay and ASI’s Report. The right of the land is based on legal principles and evidence. And evidence shows that despite the existence of the Masjid, there was never a stoppage on the worshiping of Hindus in the disputed area. And Supreme Court also gave an opinion on the Allahabad High court, saying that the verdict of dividing the entire area in three parts was an unsustainable judgement and a wrongful relief as this was never asked by any of the parties involved. Hence, the Allahabad Judgement was overruled.

Further the Supreme Court said that the majority of the case is based on historical facts and figures so relying on probabilities; one thing is established that on the outer side of the property, Hindus have been worshipping since 1857 which establishes their right. The court also mentioned that the prohibition of Muslims praying at the land happened from 23rd December 1949, the day when the murti was kept in the masjid resulting in their right to worship to be deprived.

So the supreme court used its powers as per article 142 of the constitution of india, in order to fix all the mistakes that have happened gave a final direction that the 2.77 acres of land goes to Ram Lalla Virajman and through the central/ state government, the Sunni Waqf Board would get 5 acres of land. Both the parties would get their allotted lands on the same day.

A lot of people as mentioned like Justice JS Kehar, Vajpayeeji etc above tried really hard that the matter could be resolved with mutual consent or mediation but as it never worked out, so the Supreme Court had to intervene.

PrevPreviousCASE ANALYSIS : THE CASE THAT LAID DOWN THE DIFFERENCE BETWEEN ORDINARY NEGLIGENCE AND MEDICAL NEGLIGENCE
NextAttribution of Liability in medical negligence with the introduction of Artificial IntelligenceNext