Menu
Lawjure > Blog > Legal > CASE ANALYSIS : THE CASE THAT LAID DOWN THE DIFFERENCE BETWEEN ORDINARY NEGLIGENCE AND MEDICAL NEGLIGENCE

CASE ANALYSIS : THE CASE THAT LAID DOWN THE DIFFERENCE BETWEEN ORDINARY NEGLIGENCE AND MEDICAL NEGLIGENCE 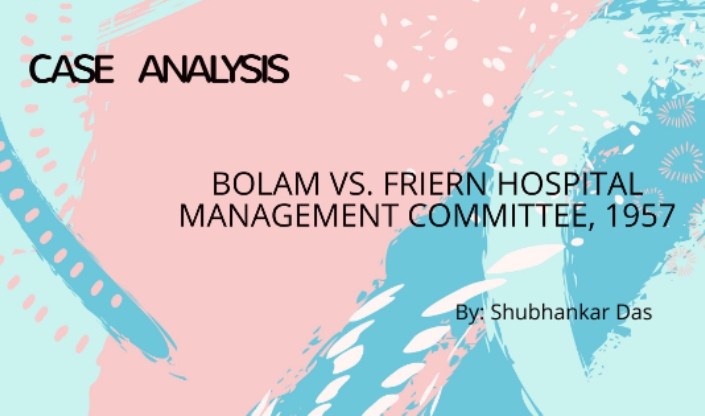 Hector Bolam was a psychiatric patient who went to Friern Hospital as a voluntary patient for issues related to recurrent depression. After diagnosis, the doctors decided that he has to be treated with ECT (Electroconvulsive Therapy) and Bolam agreed to the same.

Now, ECT at that time existed in two forms:-

Bolam was given an unmodified ECT and he was not even restrained during the procedure. He was given unmodified ECT for 7 to 10 times a day each session. In the 3rd session his depression improved, but at the same time since he was not administered with any muscle relaxant or anesthesia, hence he developed muscle fracture called acetabulum (both sides of pelvis bone is fractured). When he came to know about this he filed a suit for damages against the hospital.

ON BEHALF OF PLAINTIFF

ON BEHALF OF DEFENDANT

Judge McNair called upon experts from the medical field and set up an expert board to determine the issue related to the administration of muscle relaxant or anaesthesia during ECT. One group of experts stated that anaesthesia and muscle relaxant are considered dangerous and consist of high risk to the patient, hence use of anaesthesia should be avoided. (it is to be noted that this case is of 1957 and during that period anaesthesia was a newly invented drug used in surgeries and other medical treatment, but was considered dangerous due to presence of adverse affect) The other set of expert group said that, the hospital should have given anaesthesia and muscle relaxant to Bolan, because then the pelvis fracture could have been avoided and also they should have warned Bolam of the probable outcome of the treatment.

Finally judge McNair applied his judicial mind and held that, there was no medical negligence on part of the hospital.

He laid down the following test to determine whether the hospital should be held liable for medical negligence or not:-

This is also called the “peer review system”, where an expert group of the same profession with the professional knowledge will be made and they would judge whether the actions of the defendant match up to the required standard of care.

Failure to use such care as a reasonably prudent and careful person would use under the similar circumstances will result in negligence, since the doctors were able to follow one of the practices which was prevalent at that time the doctors are not negligent.

This is considered one of the landmark judgements in the medical jurisprudence and one of the first judgements to have discussed medical negligence in detail. It stated that medical negligence cannot be determined in the same manner as ordinary negligence is determined. It laid the principle of Bolam test i.e. standard of care of a professional will not be judged according to a actions of a rational prudent man rather will be judged if it fulfils the standard recognized by a body of professional experts in the particular field. The bolam test was followed and evolved to a next level in the case of Side away Vs Board of Governors of Bethlam Royal Hospital, 1985 where court held that, the medical practitioner need not inform the patient of remote side effects or risks that are minimal in probability because before the treatment or during the treatment a patient is going through a crucial time and the only effect that mention of risk can have on the patient’s mind can be in the direction of deterring the patient from undergoing the treatment which is in the expert opinion is in the patient’s interest. Both these cases gives a negative approach to the concept of informed consent, which clearly states that a patient need to be told of every aspect of risk associated and method of treatment undertaken before proceeding with taking consent from the patient. Similarly, in the year 1997, Bolitho vs Hackney health authorities case the court held a different opinion than that of the bolam test, court stated that “the court is not bound to hold that a defendant doctor escapes liability for negligent treatment or diagnosis just because he leads evidence from a number of medical experts who are genuinely of the opinion that the defendant’s treatment or diagnosis accorded with sound medical practice.” There after several other courts have gone on to either criticize or support the bolam test. Some of which are as follows-

If we look at present scenario or legal development then bolitho’s ruling can be applied to reject the expert’s findings by the court if they find it to be illogical, however largely even today Bolam’s test is followed for the determination of standard duty of care that a medical practitioner has to met in any particular case.

About the author –
This case analysis is submitted by SHUBHANKAR DAS, 5th Year B.A.LL.B (Hons.) student at Institute of Law, NIRMA University.